BAROQUE ARTISTS have performed at the White House, the French, British and Portuguese Embassies, Strathmore Hall, Mt. Vernon, Woodlawn Plantation and other historic locations. They began concert work together in 2002 and have won critical acclaim for their performances. 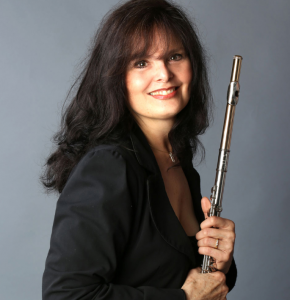 Karen Johnson, co-principal flutist of the Chesapeake Orchestra and formerly principal flutist of the Washington Bach Consort, combines instrumental mastery, great beauty of sound, and a poetic sensibility in her distinctive and memorable performances. On May 15, 2012 Cecelia Porter of the Washington Post said, “…we heard enrapturing solos….(from)flutist Karen Johnson.” Her diverse musical repertoire ranges from the sacred to the popular, and her many collaborations include appearances with pop star Stevie Wonder, the Takacs String Quartet and the Bach Aria Group. On the festival circuit she performed at the Bethlehem Bach Festival, the Shelter Island Music Festival and the Glimmerglass Chamber Music Festival. Her recent recital venues include the Kennedy Center, the Southern Maryland River Concert Series, the Washington National Cathedral and the National Gallery of Art in Washington, DC.

Ms. Johnson, whose artistry has been described as “exquisite” and “mesmerizing,” continues to explore new vistas with the commission and premiering of new works by distinguished composers including Sotireos Vlahopoulos, William Albright and Jeffrey Mumford. In 2009, the flutist premiered Thomas Benjamin’s new work, Say it is You – Poems of Rumi (for flute, soprano and piano). She performed the US premiere of Alejandro Vinao’s Formas Del Viento for flute and marimba in 2010. She is featured on Jeffrey Mumford’s CD ‘The Focus of Blue Light’, and in the coming months she will be appearing on the composer’s ‘Signature Series’ at the Lorain Country Community College (Elyria, Ohio), and complete recording works for flute and piano (with Carlos-César Rodríguez) for an upcoming release titled ‘From the Americas With Love.’

In 2010, Ms. Johnson teamed up with two world-class musicians, pianist Carlos-César Rodríguez and percussionist John Kilkenny, to form the new ‘Dancing Heart’ ensemble. Their mission: to showcase distinctive, stimulating programs of commissioned pieces and classical works – in an interactive, engaging and transforming fashion which often includes intimate exchanges between the performers, their guests and their audience. The three musicians, passionately dedicated to enhancing their audience’s experience, offer several novel programs in various configurations. Their programs for flute and piano are titled Meet the Composers; Modern Masterworks for Flute and Piano; From the Americas, and Music from Other Lands. As a full trio, they perform Music and the Elements; The Contemporary Mystic; Ecstasy of Longing, From Poulenc to Piazzolla, Neshama (Soul) and The American Spirit.

Karen Johnson is also a dedicated student of yoga and meditation. Her course, ‘Performing with Heart,’ invites musicians to explore and enhance their performing experiences through visualization, relaxation and imagery.

Ms. Johnson is a winner of numerous competitions and awards, including the Individual Artist Award of the Maryland State Arts Council. She is currently on the faculties of both the Levine School of Music and St. Mary’s College in Maryland, as well as the Northern California Flute Camp (Carmel). She is also an active participant in the ‘Bach to the Future’ music outreach program in the District of Columbia. 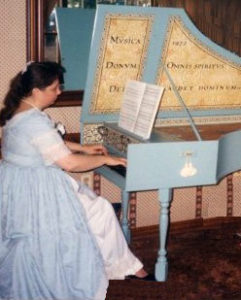 PEGGY LACEY CRAIG holds a B. Mus. degree from the University of Maryland and a M.M. degree from Peabody Conservatory, where she studied with Shirley Mathews. She also pursued post-graduate studies at the Baroque Performance Institute at Oberlin Conservatory in Ohio where she studied harpsichord and fortepiano with Penelope Crawford and additional harpsichord study with Ed Smith in New York. Ms. Craig has taught harpsichord at Shenandoah Conservatory in Winchester, VA and has appeared as a soloist on the Coolfont Recital Series in Berkeley Springs, WV; Bedford Springs Festival for the Arts in PA; and on the Dumbarton Recital Series in Georgetown and at Catholic University in Washington, DC. With Music Festiva, she has performed at Bruton Parish in Williamsburg. Ms. Craig has also performed with many chamber ensembles in the Washington, DC area., including the Bach Sinfonia, the Baroque Chamber Duo, Baroque Artists, Hesperus, the Mid-Atlantic Chamber Orchestra and the Fairfax Symphony Orchestra, as well as with the UM Chamber Chorus in Germany. Among her credits are performances at the White House, the French, British & Portuguese Embassies, Woodlawn Plantation, and many other historic locations. She has served as Music Director/Harpsichordist with Opera Americana and as Music Director/Organist at a number of churches in the greater Washington, DC area. Ms. Craig is a founding member of several period-instrument ensembles and has served as accompanist for Robert Craig, Rebecca Littig, Leneida Crawford, and Angela Powell. Ms. Craig owns two historical replica harpsichords (one 17th-c. French double-manual and one Flemish transposing single) and several portable keyboards, including a Roland C-30 digital harpsichord/fortepiano/organ which features five historical tunings and the use of either modern or Baroque pitch.